Please put the gun away and then we can talk!

I get asked this question a lot: Do you every get a gun pointed at you. The answer is yes.

I am not referring to a hunter …… that is another story.

The most interesting story takes place during a project in Wells, Maine. My team was out in the woods and searching for different monuments. We decided to cut across the 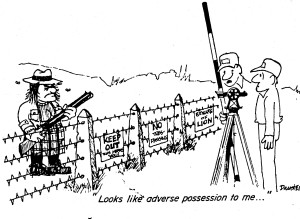 property to start from a different side when we came across a house.

There was not supposed to be a house on the property, and there was no driveway leading to the house. We knocked on the door, but no one answered. We also noticed a swastika flag hanging in the window. We started reviewing some of the documents we had and could not find any out sale or any indication that we were in the wrong place (surveyors do not get lost, again another story).

We decided to move back into the woods to a known point that we could match on a plan. We then proceeded along the boundary still puzzled about the house. As we came to a corner in a stone wall, we met an angry man holding a rifle pointed right at us. He was a tall bald man wearing army fatigues and big boots. He demanded to know why we were there. We asked him to lower the gun and we would explain what we were doing.

After a few moments, he lowered the gun, but proceeded to open the chamber to show us that it was loaded. We took out all of our documents and showed him where we were on the property so he did not think that we were trespassing. We asked him about the house and he explained that he had an old unrecorded deed that his grandfather gave to him but no right of way to get there.

Over time his grandfather had tried to resolve the situation with the landowner, but all attempts failed. He carried all the materials piece by piece, without a driveway, and built the house. He used different access points so no one knew he was living there. While talking with him, we explained that we had to disclose his situation to the land owner and assured him that we would help to get the situation resolved.

After the survey was completed, the land owner and the man in the woods came to an agreement acknowledging the unrecorded deed and a right of way was worked out. He did apologize about the gun and his manner. Since the situation did not escalate, we did not report the incident.